How to become a baker: Career Information and Requirements

I didn’t know what love is before I found out brownies and fell in love with it until the kingdom come! As you are reading this, I guess you have fallen in love with baking like the way I got stuck in the cakes and pastries. Want baking as a career? Stay tuned to know how to become a baker and rock that profession.

Who is a Baker?

Are you thinking I’m talking about the people whose surname is Baker? Certainly Not!

Semantically, a baker is a person who makes bread and cakes, especially as a trade. He bakes and sells bread and other products made of flour by using an oven or other concentrated heat source. The place he works is called a bakery.

However, the first evidence of baking occurred when humans took wild grass grains, soaked them in water, and mixed everything, mashing it into a kind of broth-like paste.  Later, when humans mastered fire, the paste was roasted on hot embers. It made bread-making even easier. Bread baking pitched in Ancient Greece around 600 BC, and after that, the invention of enclosed ovens took place. 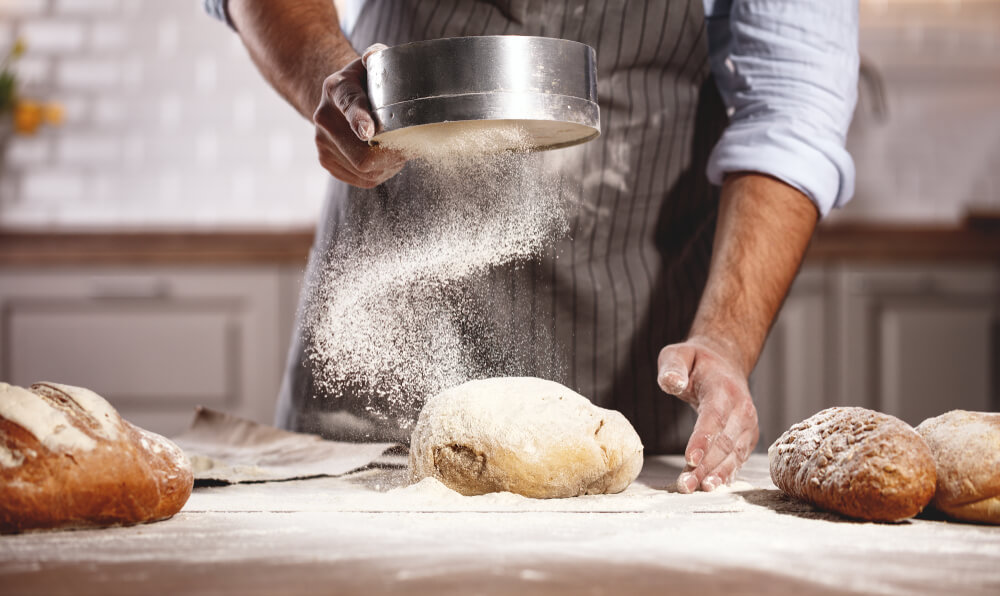 What do Bakers do?

Being a baker, you have to perform a handful of duties every single day. While your primary task will be mixing dough and make mouth-watering bread, you have to complete several other jobs. That include:

You don’t need any formal qualifications. Many bakers learn most of their skills on-the-job over several years. That said, employers will almost always ask that you have at least some basic literacy and especially some math skills. So a few good GCSE will always keep you in the front line.

But if you don’t wish to work your way up from a primary, entry-level position, then you could undertake some specialist vocational training. Several UK colleges offer relevant courses like:

Also, you can add in your bag of qualification by taking courses like sourdoughs bread and pastries or homemade dough mastery course.

Is It Hard to Become a Baker?

Frankly saying, baking is not an easy peasy job to be done. That is to say, working as a baker can be challenging and physically demanding. Commonly, you will be working in a hot, dusty environment, making it far from ideal if you suffer from allergies. Besides, it can be nerve-racking if you have giant orders to meet. If you go freelance, you have to handle all the stresses that come with starting a small business from scratch, including a lack of stable income.

But you love baking, in it? And as long as you know how to bake, life is sure to be sweet! So, I’m sure you’ll beat the stress with the whisk. Steps to Becoming a Baker

Becoming a baker associates enrolling in a training program at a supermarket, or apprenticing with a craft baker. Let’s get straight down to the steps on how to become a baker:

Having a diploma can help you to become a desirable candidate in the field. But it is not that mandatory. It would be best if you possess a firm grip in maths in high school. Apart from this, you should take home economics, cooking, or other baking-related courses to aid you to get a head start.

Also, you can take a college course like a Level 2 Certificate in Bakery or Level 3 Diploma in Professional Bakery. You may need:

To improve your craft and learn more technique, you can enrol to a technical or culinary school. It will help you to spot your niche as a baker. These programs usually last from 1 to 2 years. They will educate you in nutrition, health, and mathematics, among other related topics.

If you feel like this is the best path for you, look into programs in your area that offer an excellent financial package. Also, If you wish to be a high-end pastry chef, for instance, then you should get coached at the best program you can afford. This kind of work is highly specialized, and extra training will give you the edge you need to get noticed and hired.

You could also begin by taking a baker intermediate or advanced training. You can be a trainee at a store or supermarket near your community. There you’ll learn more ground cooking skills, like how to bake cookies of different kinds. Or, you can join at an artisan bakery to learn more complicated skills, like how to bake cakes. This training generally takes 1-3 years, and you may be able to find an apprenticeship for aspiring bakers at a bakery.

Additionally, you can also look into becoming a baker’s assistant if you have the experience and determination to do so.

The entry requirements are: 4. Specialized in a Specific Field

Although there is no need to make this decision as you begin your training or apprenticeship, it assists to have an idea of the type of baking you’re most interested in. You can choose to be an in-store, plant, or craft baker.

A retail baker commonly works in speciality shops, bakeries, or grocery stores. You’ll produce a smaller volume of baked goods for people to buy or to eat directly in the store. However, if you want a commercial career, you’ll have to work in manufacturing facilities that make baked goods at high speeds. Being a craft baker demands the most skill, and you can also use your way up to become successful in this field by starting at a store or a plant.

A real baker doesn’t need any certificate to prove their efficiency and skills! But sometimes you may need to get a certification as a showcase of your productivity.

You may be able to start as a trainee or as a bakery assistant. Or, you can apply for a job in a bakery if you have some catering experience. You can apply to any baking or pastry related industry, any grocery or pastry shop, or any dessert corner. Besides, after gaining experience, even you can create your own business! For this, you have to hire, train, and supervise staff and have a smart amount of capital.

Skills Needed to be a Baker

You dream of being one of the best bakers in the globe, don’t ya? To get this crown, you need to adopt the following skills and knowledge:

See, I told you, being a baker is not a hard nut to crack!

Career development options depend on the degree, experience, and the size of the workplace. You’ll start their careers with an apprenticeship or in a junior position like an assistant baker. The career hierarchy may look like the following pattern: Not that bad, right?

In a nutshell, to become a baker at first you’ll need a high school diploma, then you can join in a culinary school and baker training. Next, if you want you can be specialized in a certain area of baking and get certification and accordingly, you will be all set to start your baking journey!

I believe you have all the information you are looking at how to become a baker. Also, I’ve tried to cover all the relevant topics to help you in choosing your career path.

Now that you’ve set up your mind, what are you waiting for? Just make a move and be the king of the baking world.

0 responses on "How to become a baker: Career Information and Requirements"